Notice: Trying to get property 'ID' of non-object in /home/dh_r3t3fd/theexceptionalskills.com/wp-content/themes/Avada-Child-Theme/templates/title-bar.php on line 17 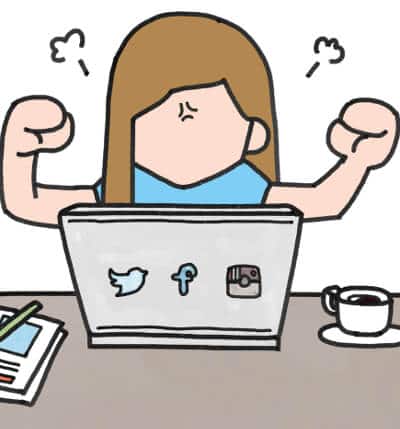 Arguing on the Internet is like running into a brick wall: it’s stupid, it wastes time, and it can leave you with a throbbing headache.

How many times have you seen someone change their mind by arguing on Facebook or in the comment sections of a news article?

It rarely happens. And there is a reason for that.

Arguing on the Internet (or text or email) is generally very ineffective, dangerous, and can often be destructive.

Let’s find out why.

Anytime you communicate or argue behind a screen via text (whether on socials, emails, or texting), the opportunity for misunderstanding exponentially grows.

You can say one phrase and it have multiple meanings depending on the tone you use or the body language you show. You don’t have any of that when you’re behind text on a screen.

And generally, as humans, we assume the negative.

It can be so easy to assume a sarcastic tone or anger or a negative attitude or negative intention.

Then we may argue back over something that never was negative in the first place. All because we made assumptions about the other person’s emotions or intentions – because we couldn’t see the nonverbal communication.

People don’t seek to understand. They just want to spout their opinion.

Usually, when people argue on the internet, it’s not to resolve an issue or to understand each other, it’s just about spouting one’s opinion.

It’s ineffective because when everyone is shouting and spouting opinions and no one is listening  – what’s the point?

You rarely (if ever) are going to change someone’s opinion just by spouting an opinion.

And you rarely will ever win someone over by shouting “You’re wrong!”.

When someone tells you that “you are wrong”, what’s your reaction? Do you say “hmm, you might be right”, or do you generally get defensive?

Usually, when you tell someone “you are wrong”, defensive mode comes up and they become even more entrenched in their argument, even if they are wrong, because of a sense of pride.

There are better ways to do that.

And why is it dangerous?

Because when we are all shouting our opinions at each other and not listening or trying to understand each other, it separates us even more.

We become more and more “enemies” and hostile toward one another and to the other viewpoints.

We begin to see each other as objects that we lay labels on instead of people.

People say things they normally wouldn’t say behind a screen.

There’s a sense of safety behind a computer screen or phone.

People feel so much safer saying statements they normally wouldn’t say in person.

And that can be dangerous.

It’s easy to see people as objects or to minimize the impact of what we are saying when we are separated behind a screen.

And, too often, saying something behind a screen is a coward’s way out.

Typing behind a screen also brings out the worst in people.

One of the worst parts of “arguments”, especially in comment sections of news articles, is that people are insulting, name-calling, and being rude and negative to those who don’t agree with them.

Often the worse in people come out.

Many would not do the same if they were speaking face-to-face.

It can also be easy to do something you might regret. In a moment of anger, one little message and one little click can cause damage and hurt that you can never take back.

So how can we do it better?

First do it in person, if possible

As much as possible, if there is a disagreement or a possibility of miscommunication, do it in person.

Email and online interactions are great for sharing information, but when it comes to decision making and areas of disagreement, it’s best to do it face-to-face.

If you can’t do it face-to-face, doing it by telephone is an option. Just avoid doing things behind a screen and text if possible.

If you can’t do it in person or telephone, here are some tips to follow (that work even in person):

If your goal is to win, you lose.

You may win the argument, but you will hurt the relationship. And likely you won’t even convince the other person. They will be even more stuck in their opinion, just with a more negative attitude toward you.

When you take the time to try to understand the other person’s viewpoint, listen to them, paraphrase, help them feel understood and validated, then they are much more likely to listen to your viewpoint.

And if you both come to the disagreement with a sense of listening and trying to understand, seeing yourselves as a team working together to solve it versus “you versus me”, then you are both likely to learn something new and may find a solution that is beneficial to both.

Don’t waste your breath (or fingers).

It’s foolish and a waste of time to argue with those people.

In fact, for me, I avoid Facebook arguments (and arguments online in general) because I know they are generally pointless. People don’t want to understand – they just want to spout. I just don’t waste my time.

Use kindness, humility, and tact

When you do have a disagreement online, use kindness, humility, and tact.

If you come into it with contempt toward the other person and their viewpoint or with arrogance toward them, you’ve already lost.

If you are kind, come to it with a sense of humility – that you don’t know everything, that there are other facts and viewpoints that you may not know (and that even you may be wrong) – you will much more likely deal with the issue effectively and open up the door with the other person for better communication and problem solving.

And, if the other person is wrong, if you use tact – asking them if they considered this or that viewpoint, using questions, digging deep into their “why” – versus saying “you are wrong, it’s this way!” – you actually may help them change their mind.

Arguing on the internet is like running into a brick wall – avoid it if possible.

It’s ripe for misunderstanding, people generally are there just to spout their opinion, and people often say things they normally wouldn’t say in person.

Doing it in person (or phone if you must) is best, but, even if you have to deal with an issue online, using good listening skills, seeking to understand, using kindness, tact, and humility, and having the right goals for the conversation can even make conversations online productive (at times).

Thomas is the owner of Radiant Hope, LLC, which includes The Exceptional Skills and GrowingMarriages.net. He is an author, blogger, foster parent, and avid learner.