Face it. Leadership mistakes are inevitable. As a leader, you are going to make mistakes. That’s just reality. Every leader makes mistakes.

What matters, then, and what helps separate great leaders from poor leaders, is what you do when they happen.

Your actions will determine the type of leader you are as well as your effectiveness as a leader.

What leaders often do when they make leadership mistakes:

As a leader yourself, you can do better than this.

Here’s how to overcome leadership mistakes in 3 steps:

1. Take Ownership of Your Mistake

One of the most critical and biggest leadership mistakes leaders make is not taking ownership of their mistakes. This comes about for a variety of reasons.

First, some leaders feel they have to act “invincible and strong” in front of their employees.

They believe that showing weakness or vulnerability will make them look weak and that they will not be respected as a leader.

The truth is, it’s the exact opposite.

As John Maxwell said in his book, The 21 Irrefutable Laws of Leadership:

“Your people know when you make mistakes. The real question is whether you’re going to ‘fess up. If you do, you can often quickly regain their trust.” ~ John Maxwell Click To Tweet

Your team knows when you mess up. They will see your leadership mistakes and probably know your weakness. Pretending that everything is great makes you look weak.

People will respect you more if you are open and honest with them. They will also be more likely to follow you. (Yes, there is the ability to be TOO vulnerable, but too often, leaders show too little vulnerability).

Some leaders don’t admit mistakes because of their insecurities (or they are just all about themselves).

Have you seen this kind of mistake before? Does that describe you as a leader?

If you want to be a great leader, you must do the opposite.

To blame or make excuses just makes you look weak as a leader. And, if you are blaming your team, you are also hurting teamwork and creating ill will.

Even if it was something one of your team did that led to the failure, as a leader, you are ultimately responsible. If you behaved poorly, even if someone “deserved it”, still own it and apologize.

Furthermore, when you and your team do well and deserve praise, pass the praise and credit to your team, not yourself.

Bottom line: Own your mistake and take full responsibility for your actions.

2. Examine what went wrong and learn from it

Taking ownership of your mistake is the first critical step you need to take. However, if that’s all you do, you leave yourself to make the same mistake over and over.

So, as a leader what would you do next?

After you take full responsibility, take the time to examine what went wrong.

If it was an activity or behavior that only had to do with you, take some time and examine the reasons why those mistakes occurred.

Learn from your mistakes.

If it is helpful to you, you can also get others involved in the search.

If it was a mistake that you led (e.g. your team didn’t meet certain expectations or mistakes happened while performing), it’s okay to spend time examining it yourself, but it can also be beneficial to dive into the mistake as a group (or with the other individual).

Make it clear to everyone that you aren’t searching for blame. However, you do want to look for the causes and ways that you can improve your chances of not making the same mistakes again.

(If it’s a behavior or action of a specific person, help the person process and recognize what happened through good questioning. Provide whatever support and training they might need to succeed.) 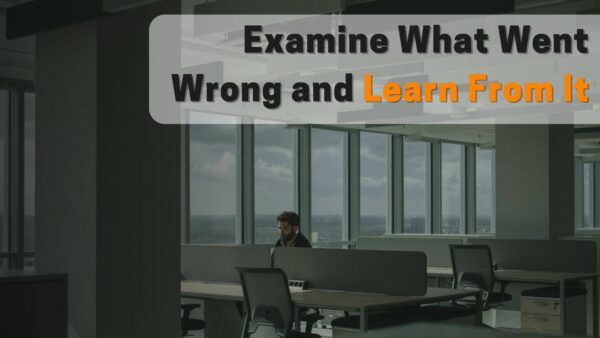 It’s not about blaming or punishing, it’s about learning.

Go through the process and steps of what happened and examine it from every angle.

Also as a side note: In the future, when making plans, you can do a pre-mortem. A pre-mortem is where you say “Ok, it’s 6 months (or however long) in the future and our plan failed. What happened?”

Then, evaluate the potential failures of your plan and work towards preventing them from happening again.

Bottom line: Once you take full responsibility, examine the failures to determine the causes and learn from them.

3. Commit and take action to fix the issue to keep it from happening again

In some cases, you made crucial leadership mistakes that affected other people. When you took ownership, you should have already taken the first step to fixing the issue: apologizing.

After you apologize, you still need to see why it happened.

In other cases, you may not need to apologize, but you still need to work to fix the issue, or at the least, make necessary changes to ensure that it will not happen again.

After you’ve identified the culprit of those leadership mistakes, take action. Talk to whomever you need to make it happen. If you still need to apologize, apologize. If you need to change priorities or habits or routines, do so.

If you need to change procedures, make it happen.

Whatever it is, commit to it and execute necessary changes so you can avoid doing the same leadership mistakes over again.

Bottom line: Once you’ve identified the causes of the mistakes, commit to fixing them and prevent those mistakes from happening again. 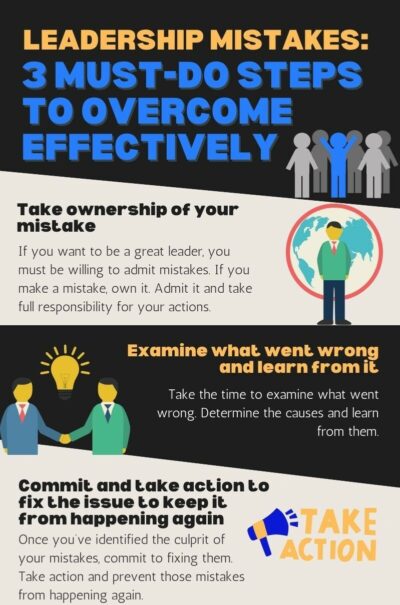 The steps to take to overcome leadership mistakes are simple, but they can be hard to do.

Because of that, too many leaders fail to follow it. You may have observed this fact in some of the leaders you have worked for.

But that’s not going to be you.

You, on the other hand, will take ownership of your mistakes and then exert the effort to make the necessary changes, right?

Because if you do, you are one step closer to being an even greater leader that others want to follow.

As Anne Frank said: “What is done cannot be undone, but at least one can keep it from happening again.” ~ Anne Frank Click To Tweet

And that would be YOU.